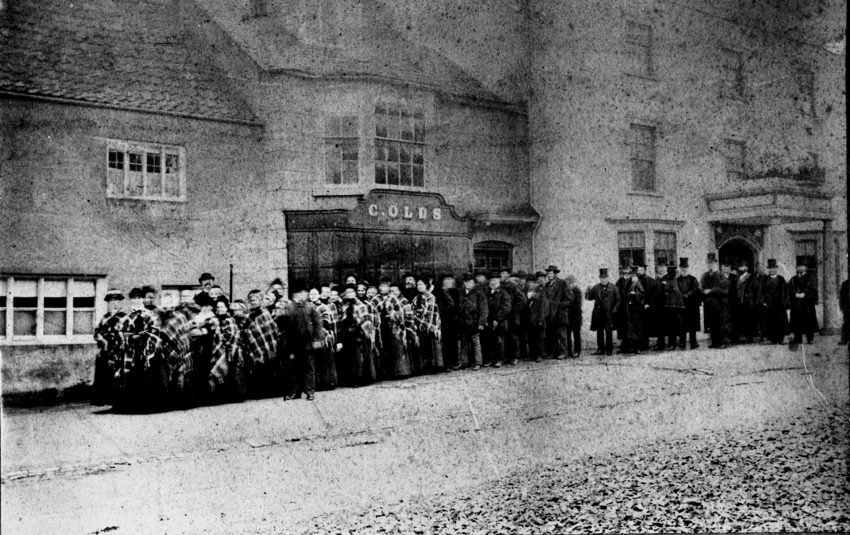 The above photo shows a parade in Thornbury High Street in the early 1900s.   The photo must have been taken after 1905 the shop behind the parade is occupied by Charles Olds who only moved there after that time.  The parade was part of a ceremony which had taken place each year for more than 200 years and in which the poor people of the town were presented with warm clothing at Christmas by the Town’s Mayor and Corporation.

In the 17th and 18th centuries a number of local people donated properties in the town to be used to benefit the poor people of Thornbury.  Income from the rents of these properties was administered by the Town Corporation led by the Mayor.  We are not sure when the custom started, but the September 1961 bulletin of the Society of Thornbury Folk refers to the earliest reference we have found so far.  It says that in 1660/61 £6 8s 0d was paid out by the Mayor for ‘cloth for to clothe the poore at Christmas’.

We have copies of the Mayors Accounts books from 1819 to 1911 and these show that the gifts of warm clothing were then being made at Christmas.  The recipients had to assemble outside the Swan Hotel and then parade down the High Street wearing their new coats, dresses, petticoats and shawls.  They went to the Church where there was a service enabling them to give thanks for their fortune.

There are several accounts of the ceremony which took place each year.  A book published in 1847 called ‘The Church Goer, Rural Rides or Calls at Country Churches’ gives an account of a visit to Thornbury on Christmas Day by a person called Joseph Leach.  It says:

‘He reached Thornbury to find that Thornbury has a Mayor and corporation and the principal and almost only duty which the great civic functionary has to perform during his year of office is to provide coffee for his co-council men and the incumbent of the parish at his residence on Christmas morning and, having discussed that and a quantity of hot rolls, to walk preceded by some poor men and women through the town to church’.  He saw the procession.  ‘First came a file of old women in gowns, aprons and bonnets alike; then a string of elderly men in brown coats with very bright buttons and black hats with very broad brims, the gift of the Corporation.’  ‘The poor past, two tall staff men swaggered on in front of the Civic party and then came the Mayor in a broad brimmed hat, a black surtout and brown cotton umbrella, having the Rev. Stephen Townshend canonically clad, on his right and a detachment of brother aldermen bringing up the rear. They were a good humoured, good natured and good looking set of gentlemen and none could seem more happy and contented but they were piteously shorn of their pomp – no state carriage, no gold chain and silver gown no insignia or precious metal unless indeed a decent-sized silver mace and a white wand’.

In 1948 Frederick Henry Burchell presented a talk giving his memories of the town and its people. He said:

‘As far as I remember the Mayor’s duties in those days were to distribute the Parish Charities.  One of those charities was what was known as the Mayor’s Gifts, and these gifts were distributed just before Christmas Day.  The gifts consisted of a soft felt hat and a coat for the men, and a shawl and a gown for the women, and on Christmas morning these recipients assembled outside the Swan Hotel in the High Street, headed by the Mayor in his robes of office and other officials, and they paraded to the Church for Service at 11 o’clock, and that was, as we can imagine, an interesting parade which attracted a good many people besides the recipients’.

Mr Burchell commented that he didn’t think it was ‘right or nice that recipients of charities should be paraded to the public view’ although he didn’t know that anyone objected. In his opinion he thought they might be ‘rather proud to go and march to church in their new togs’.

In contrast to what Mr Burchell said, we have seen a letter from a member of the Stinchcombe family to one of their children living elsewhere in which she said that she would have preferred to have money rather than clothing!

We are not sure when the parades came to an end.  Town Trust records show that the gifts were presented by the Chairman at the Church Institute, and later in the Thornbury Men’s Club or Thompsons Cafe, a couple of days before Christmas.  The gifts of clothing came to an end in 1940 when the Town Trust ran into financial difficulty because of unexpected expenditure on properties to make sure they were still habitable and able of being used as almshouses.  They opted to give each person a voucher to be exchanged at local shops.  These vouchers initially either for 10/- or £1, were presented in early December.  A few years later the Trust arranged to deliver the vouchers to the recipients rather than expect them to parade in public.