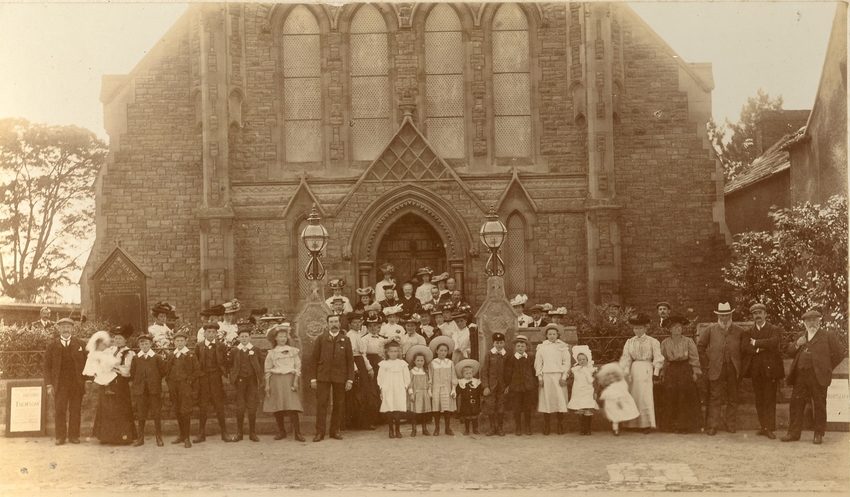 We feel we haven’t been able to do to justice to the history of the building, nor the people associated with it.  We’ve created the webpage in the hope that we will be able to add to it and encourage other people, who know more than we do, to get in touch.

We understand from the notes of Paul Wildgoose that the foundation stone for new Wesleyan Chapel in the High Street of Thornbury was laid in 1877 .  He has said that the certificate as a Place of Worship was dated 12th July 1878, although it seems there was still some work to be done.  The thumbnail photograph above was taken from a scrap 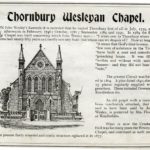 book in the Gloucester Records Office.  Click on the thumbnail to read the full text.  A Rate Book for 1877 indicates that the property was owned by the Trustees of the Wesleyan Chapel but that it was ‘void’.  This appears to mean that the land was owned by the Church but the chapel had not yet been completed.  The Architect for the building was Robert Curwen and the it was designed to seat 300 persons.  We understand that the cost was in the order of £2, 500, which was not finally paid off until 1887.

The new chapel replaced the old building in Chapel Street which was adapted for use as a community hall and became known as The Cossham Hall.  Click here to read about the old Wesleyan Chapel.  The new Chapel was built on the site of an old property which was demolished to make way for the Chapel, having been purchased by W H Councell in 1876 for £400 for the purpose of building the chapel.  Click here to read a brief history of that house

In 1879 the Bristol Mercury and Daily Post of Friday May 16th reported that the Session of the Wesleyan District Meeting had been resumed at Victoria and three separate trusts were announced at Cotham, Tewkesbury and Thornbury.  We feel that this may have had to do with the setting up of the finances for the new Wesleyan Chapel in the High Street.  The first reference to the new building being used that we have found so far was in the Bristol Mercury and Daily Post of July 4th 1882 which reported that “special services in connection with the anniversary of Thornbury Wesleyan Sunday School were held in the new chapel.”

Gloucester Records Office has a copy of a handbook for the “British Empire Bazaar” held at the Cossham Hall and organised by the Wesleyan Church in June 1900.  This handbook highlights the fact that the ‘plans for building a Sunday School on land attached had been put aside from time to time to make way for the periodic efforts for the Circuit funds’.  It suggested that the time had now come to start such a scheme.

The photo at the top of the page was taken in 1907 showing members of the congregation gathered for the opening of a schoolroom in the rear of the church.  The photo below shows the same group pictured behind the church by the schoolroom.  Click on both photos to see larger images.  The pre-fabricated school building had been ‘moved’ from the Hackett where it was erected in 1894 for use as the Church of England ‘iron’ Mission Church of St Paul.  A new stone church was built there in 1905 and the iron building was available for ‘re-cycling’.  The Alveston firm of James Hawkins was responsible for moving and erecting the new school room. 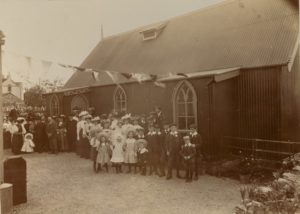 In 1927 the corrugated iron schoolroom was extended with a building of similar construction.  This provided an extra four classrooms, a changing room, a urinal and girls earth closet.  The Reverend Fellows organised the work which was undertaken by the builder, A. C. Powell.  The iron schoolroom was in use until the early 1970s when it was finally demolished and replaced by a single story hall with schoolroom.  Jack Blenkinsopp was the man mainly responsible for this assisted by Charlie Hurcombe, Cyril Brown, Harold Gath and Rev Joe Law.  A second storey was later added because of problems with the flat roof leaking. 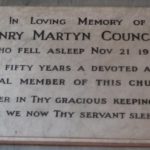 The thumbnails below on the right show the two memorial plaques erected on the Church’s internal walls.  Click on the thumbnails to view a larger image.

During the 1900’s there were three families heavily involved with the running of the church.  They were the Mills family of 28 Castle Street, the Phillips family of 62 High Street and the Blenkinsopp family of 3 Upper Bath Road. 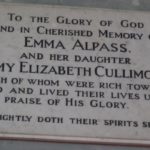 Thornbury Museum has notes made by members of the Methodist Church about the Mills family, who were stalwarts of the church for many years.  The notes refer to Robert Mills who was a decorator who was appointed trustee of Methodist Church in 1925, reappointed 1948 and again in 1968.  The notes make it clear how important Robert Mills was to Thornbury Methodists.  According to these notes he was a trustee in the inter-war period when there was great pressure for the Thornbury Methodist Church to be closed because the membership had fallen to 15.  He refused as a trustee to sign the closure paper work.  He lived into the 1970s and with the expansion of Thornbury from 3,000 to over 10,000 saw his chapel filling up again and the great joy that his act of faith in refusing to agree to closure had been justified. 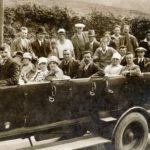 We have been told by members of the Methodist Church that in the 1970s Robert’s son, Ivor, was their organist.  We have a thumbnail photograph here on the left of a coach outing for the members of the Methodist Church in 1927.  Click on it to see a larger photograph to see that it shows Robert Mills with a moustache, standing at the back.  His son Ivor is standing next to him and Arthur is sitting next to them, with his arm leaning on the side.  Click here to read about the Mills family

George Phillips was also appointed Trustee of the Methodist Church in 1925 and reappointed in 1948.  His wife, Fanny was appointed as trustee in 1948.  Both of them were heavily involved in the church, as was their daughter, Mollie and her husband, John (‘Jack’) Blenkinsopp.  When a new Church Hall was opened in September 1975, the memorial plaque shows it was built by voluntary labour under the supervision of Jack Blenkinsopp.  The thumbnail on the left shows a photo taken at the dedication of the new hall in 1975.  Click on it to see a larger image.  We have been told that it shows (L. to R.) Charles Hurcombe, Jack Blenkinsopp, Mary Myers, and probably Harold Gath.  We’d like to hear from anyone who can confirm this or correct the names.  It is interesting to see that Jack and Mollie’s son, Colin, is continuing the family’s connection with the church and occasionally preaches there.  Click here to read about the Phillips family    Click here to read about the Blenkinsopp family 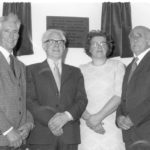 Another plaque in the entrance lobby to the Hall shows the Hall was extended and provided with a new entrance in 1987.  In 2005 further improvements were made to improve access to the church and created a pleasant garden fronting the High Street.

The Church Manse is now located in Chantry Road, but in the earlier days the Ministers lived in rented accommodation in other parts of the town.  In the 1870s and 1880s we know that several ministers lived at 16 High Street, a property then owned by the Councell family.  The 1871 census notes that Elisha Middle Shearn, a Wesleyan Minister, was living there.  We know from the Bristol Mercury that Elisha was on a rota involving him once every six weeks being the minister of the church at Kingswood.  By 1872 Elisha had moved to become a minister in Banwell.  The 1876 Rate Book notes that Revd George Robinson was the tenant of W. H. Councell.  The 1877 and 1878 Gas Rate Books list Revd Thomas Howson as the occupant, although his name is crossed through indicating that he had moved elsewhere.  In 1880 the Revd Peter Prescott was there.  In 1885 at the time that William Yarnold bought the house for £375 on 14th August the property was occupied by Revd. T. Kirby, who rented it for £19.00 a year.  The 1885 Rate Book notes that Mrs R. W. Kirby was there.

The house at 10 The Plain appears to be occupied for several years by church ministers the Reverend F. S. Chesters in 1905, the Reverend Cornelius Wood in 1909 and Reverend Albert Fentiman in 1910 and 1911.  By 1916 we know that the church was using 1 Pullins Green as a manse and the street directory of that time shows that Rev Joseph Bailey Alger lived there.

Over the years, the Methodist Church has been associated with various social or recreational groups including drama groups, keep fit groups and groups for brownies, beaver, cubs and scouts.  One of the most successful clubs set up was the Thornbury Wesleyan Football Club formed in 1922, following a split in the Thornbury Town Football Club. 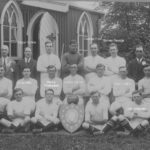 Within a year, the team had won the Second Division of the Bristol Wesleyan and Free Church League.  During the season they had won 24 and drawn 4 of the 28 matches played.  We understand that the team used Porch House in Castle Street as a changing room.  Henry Thompson was the Captain of the team and Arthur Cox Smith was the Secretary.  Click on the thumbnail shown on the right to see a photo of the team with the names of several of the players.  We’d like to hear from anyone who can add any further names to the photo.

We’ve been frustrated by the fact that we have only been able to find a few of the registers of births and marriages which are held at Bristol Records Office.  We would be very grateful to hear from anyone with information of where we can find more.  Click here to see the transcriptions of the records we have seen

Finally, we have three other photos associated with the Church.  The first shows a special event believed to be about 1900, the second is a newspaper photograph showing Mrs Fanny Phillips re-opening the Church about 1970 and the third shows a Sunday School party with Mrs Mollie Blenkinsopp and Mrs Fanny Phillips. 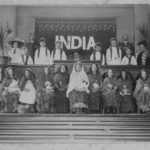 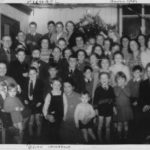 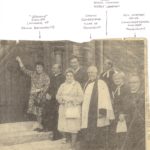