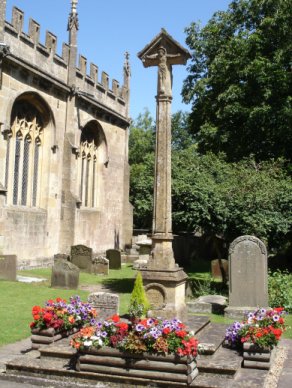 The Cross outside the main entrance to the Church was “erected by the Relatives and Friends to the Glory of God and in proud and loving memory of those from this parish who fought and fell in the Great War 1914 – 1919”.

At the end of the First World War, Thornbury, like other towns and villages, had wanted to erect a memorial to those local people who had lost their lives serving the country.  A committee was set up to consider what form the memorial should take and where it should be located.  The design suggested was in the shape of a cross 26 feet high.  The names of the fallen were to be engraved on the bottom stones.

Five sites were initially suggested: (1) The Plain on the site of the Pump, (2) on the High Street between the Wesylan Methodist Chapel and the Register Office, (3) on the High Street between the Post Office (then located where the Thai Restaurant is now) and the Market Hall (now Wildings shop), (4) on Pullins Green and (5) on the Green by St Mary’s Church.  The Committee gave serious consideration to three sites, the ones on Pullins Green, The Plain and the green near the Church.  The Committee sent out 400 forms to relatives of the fallen asking for their opinions.  Of the 71 forms returned, 42 voted for the site on The Plain and 29 for the site by the Church.  Although the Committee recognised that there would be a problem removing the pump on The Plain, they advised the adoption of that site. The Council were divided on the subject but, in the end, they agreed to The Plain site subject to being able to move the pump.  We don’t know what happened next – but we do know that the memorial was erected inside the Church grounds where it now stands.

The Western Daily Press of November 4th 1919 reported that the Bishop of the Diocese had dedicated the War Memorial Cross erected at the church to the memory of the 71 men who fell during the war.  A bronze tablet was later to be placed inside the porch.  The cost of the memorial was about £500 and it had been raised by voluntary subscription.  The crowded congregation included relatives of the deceased and many servicemen and ex servicemen who had marched from The Plain under Major Algar Howard M.C.  A service was conducted outside the church and the Last Post sounded by Messrs G and H Phillips.  We have a separate article listing those people who contributed to the fund and how much they paid.  Note this list is produced in the form of a PDF file and we apologise for it not being suited to be viewed on smartphones and small screens)  Click here to read more

There is also a brass memorial is the entrance porch listing the names of those killed with brief details of their rank and unit in which they served.  Another wooden memorial is inside the Church on the left of the main entrance which does not include details of the rank or unit.  The list of names given below is a composite of the names shown on both boards.  Click on any of the names displayed in green below to read what we have written about them and their families on the Thornbury Roots website.  Those men without details of rank and unit are those whose name is listed on the memorial inside the Church, but omitted on the list in the Porch.

Note that we are aware of the following servicemen connected with Thornbury who died in World War I who are not listed on the War Memorial: